2016 Peace for the Sea International Peace Camp in Taiwan - report

2016 Peace for the Sea International Peace Camp was hosted in Taiwan by participants from last year's inter-island solidarity peace camp in Okinawa. The Frontiers Jeju team members have participated in annual Inter-Island Solidarity peace camps since the first year in Jeju in 2014. This year, Brother Song, Baram Mal, and Curry joined, along with ten fellow peace activists from Jeju. This camp provides opportunities to learn more deeply the history and contemporary peace movements of each island and to build stronger networks of solidarity for peace across the national borders. 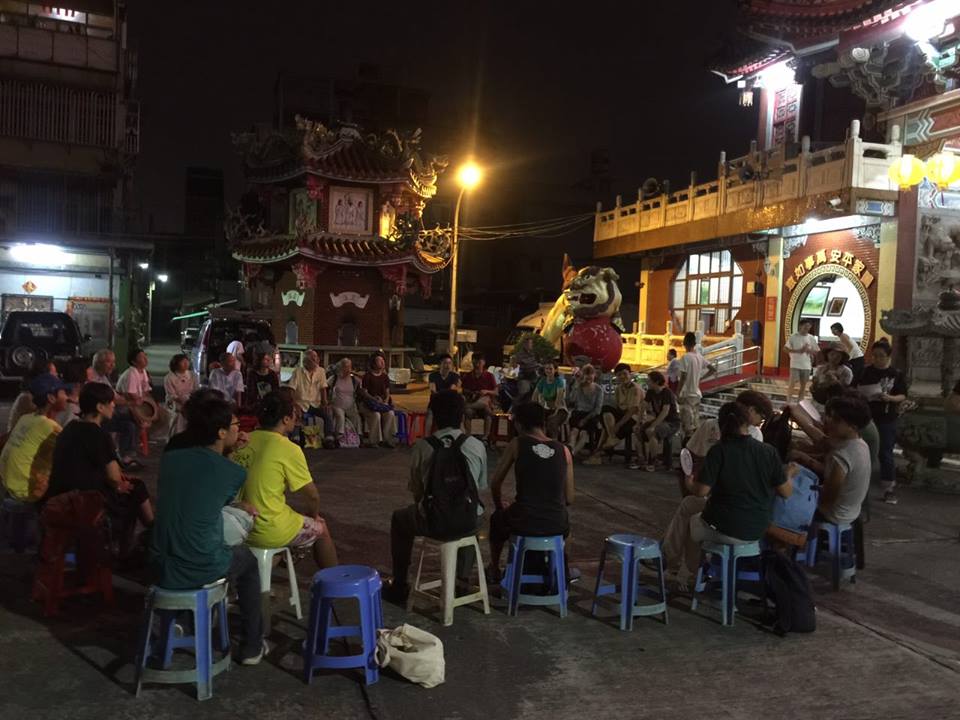 Peace for the sea international peace camp started in the afternoon of August 24. For the next 4 days participants from Taiwan, Jeju, Okinawa, and the Philippines travelled together in Kaohsiung and Taitung to learn the local histories of resistance to oppression, build solidarity and find ways to work together for peace.

On the first day, August 24, we travelled from our hostel in central Kaohsiung to the town of Houjing. During Japanese colonial rule the military took farm land from the people to build a military oil refinery. In 1987, the same year as the end of martial law, the government made plans to expand the the already large refinery and build a fifth naphtha cracker plant (for making plastic). The refinery was leaking oil into the ground water. In one instance a man was severely burned in an explosion when he lit a cigarette in his dorm. Another explosion was caused by a woman lighting a mosquito coil. People could light fire to the well water and feared to cook on a rainy day.

The plans to expand the plant in 1987 caused public outrage and the Houjing citizens blocked the entrance to the refinery. In July they decided to block the refinery continuously and Mr. Wang hired a chef to cook for the protesters. We ate the same porrige for dinner which they ate that first night in July 1987. They They blocked blocked the site for 3 years.
In 1990 the government held a referendum -the first referendum in Taiwan- but they expected to get approval for the 5th naphtha plant. Even though the government had gerrymandered a sixth unrelated district into the vote, 70% still voted against the plant. 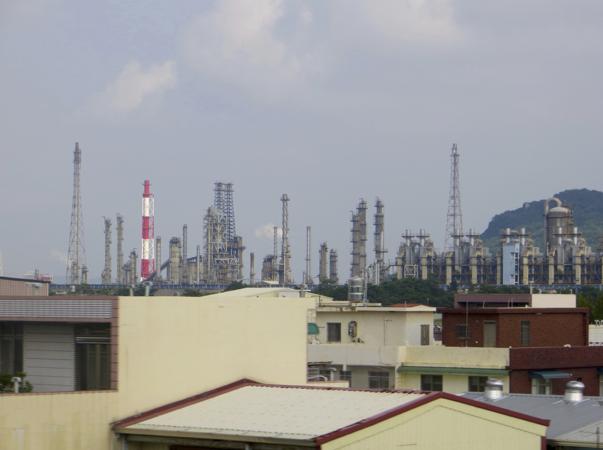 In the end the government agreed to stop the refinery and move it within 25 years. On December 31, 2015 they celebrated the end of the 25 year wait, but nothing happened. They are still pressing for the start of the clean-up process which will take 20 years.

On August 25th, Peace for the Sea camp visited Cijin, formerly a peninsula but now separated by a canal from Kaohsiung. This area has a long history of immigration from mainland China and was one of the ports that England forced the Qing dynasty to open to foreign trade. We visited a Presbyterian Church and a temple that have 300+ year histories and a lighthouse built by the British. This peninsula has been fortified by different militaries in different eras- the Qing dynasty, the Japanese, the KMT dictatorship... and though the fortifications are open to the public now they are still owned by the ministry of defense. Though the residents of Cijin live by the sea, they were not allowed under the military dictatorship to go to the coastline. It makes the sea an unfamiliar place for the local culture even today. 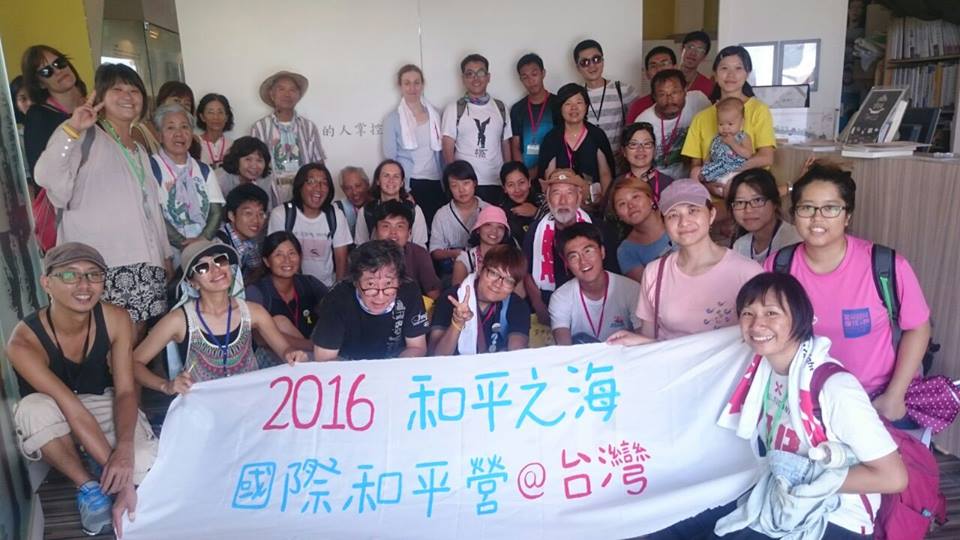 In the afternoon we went to Dalinpu and learned about new development plans that have displaced 20,000 residents since 1992. This is where the government wants to put the 5th naphtha (plastic) plant rather than in Houjing where we visited the previous day. The industrial area has 400 industrial chimneys and the pollution has caused local people to get cancer. The industrial area is built on landfill made of industrial and medical waste including mercury that seeps into the ocean. Understandably, the local people want to have a say in their situation.

In the evening we watched a documentary about so-called 'comfort women' from Taiwan who were forced into sexual slavery for the Japanese military in the second world war. 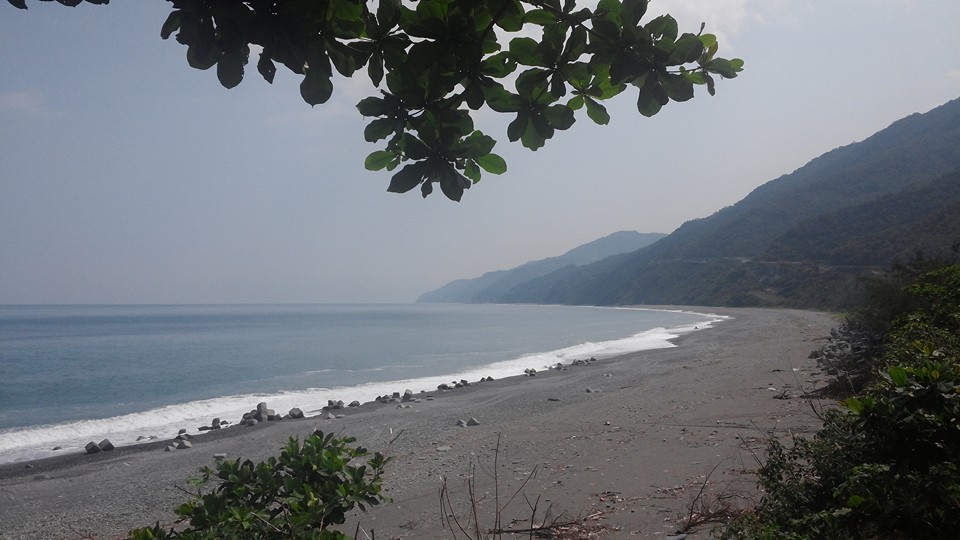 On August 26th the 2016 Inter-Island Solidarity Peace for the Sea International Peace Camp in Taiwan moved from Kaohsiung in the southwest part of Taiwan to Taitung, in the southeast. We went to the town of Lalauran and met with representatives of the Paiwan people. The Lalauran youth organization greeted us in ceremonial clothes and welcomed us to come into the village, each person stepping over a fire to seek permission from the gods for our visit. 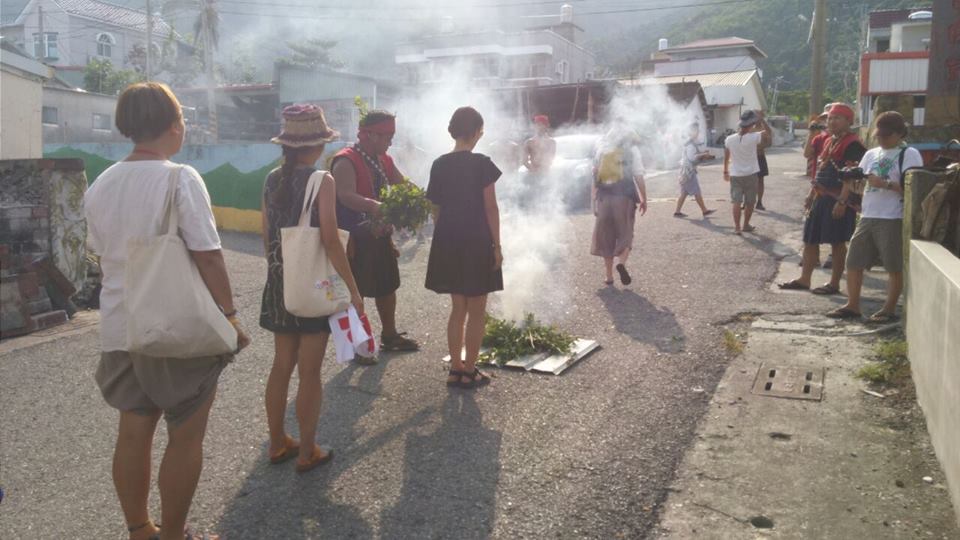 We learned the personal journey of one of the men who has been active in the youth movement of Lalauran. He was in the police in the 1980s, but he quit when he was sent to confront his own father and brother who were protesting for rights to their ancestral land. He and the pastor in Lalauran revived the traditional young men’s group in order to effectively demonstrate against, petition to, and negotiate with the government to protect their land and cultural practices, such as the hunting of wild pigs and deer.

In the evening, we had a time to share about the places where we came from (Taiwan, Okinawa, Jeju, Luzon, Ishigaki, Hainan). Many people shared power point presentations, and then we were revived by the ending song- which included throwing representative guests from each island or country into the air. 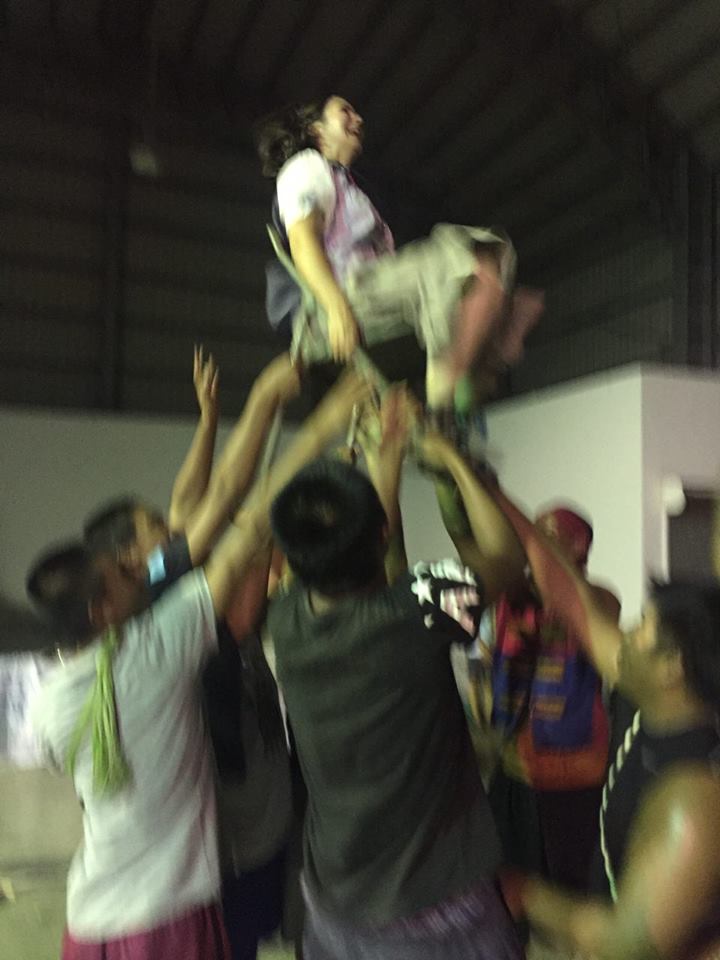 August 27th we visited a military landing strip on land that was stolen from the Paiwan people 30 years ago. It was originally a shooting range, and local farms and houses were accidentally hit by gunfire, but because of local opposition the shooting practice was ended. Now the local people are arguing for equal distribution of the compensation money and for the ultimate return of the land, which they have a legal mechanism to claim through the Basic Law for Indigenous People. This law made in 2005 recognizes Taiwan’s indigenous people’s right to reclaim their territorial lands, but it has not yet been effectively enacted. Newly elected President Tsai Ing-wen made a formal apology on behalf of the government to the indigenous peoples this August 1st. Among the indigenous people we talked with it seems that many hope cautiously that they will have more opportunities to reclaim at least some of their land under this administration, although the majority of Han Taiwanese people (whose ancestors immigrated from mainland China since the 1700s) have little awareness of the indigenous people’s situation.

We also visited the beach at Fudafudak, which in the Amis language means “shiny lands.” Illegally, with no environmental assessment or consent from the local people, the county government gave a BOT (build, operate, transfer) construction contract to the Miramar hotel to build on this land. The Amis community and many allies have successfully fought against the illegal hotel, and the construction was halted under the order of the Supreme Court, but they are still waiting for the existing structure to be removed. 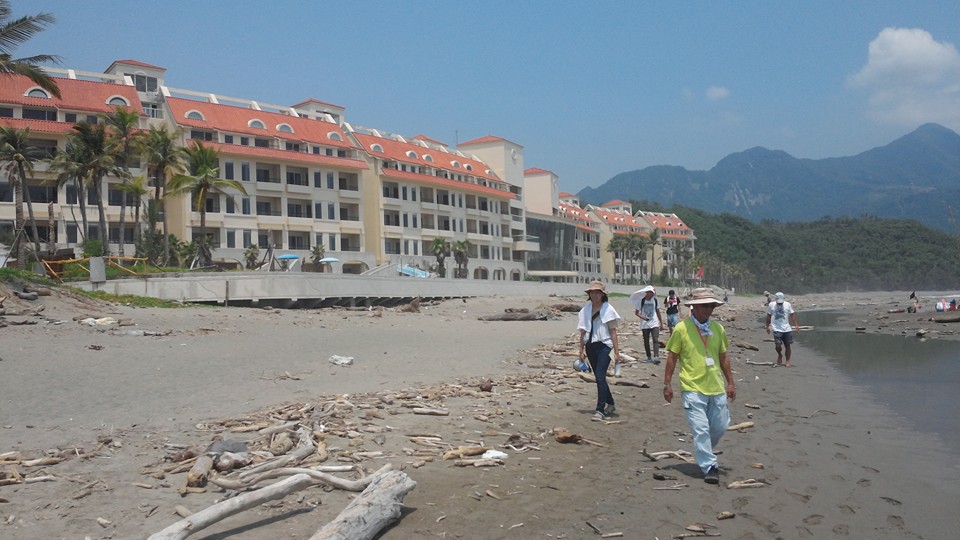 In the afternoon we had a symposium in Taitung on the topic of “Indigenous People, Self-Determination, and Peace.” In groups, we acted out silent skits of what we think it means to be indigenous people. We learned about another successful movement by indigenous youth to prevent illegal tourist development at Dulan point, just north of Fudafudak. And we learned about the continued struggle of the Tao people against the dumping of nuclear waste on Lanyu Island. Though they successfully lobbied for no new nuclear waste to be disposed there since 1996, the storage conditions for the existing nuclear waste are very unsafe and there continue to be many cases of cancer among the workers and the local population. 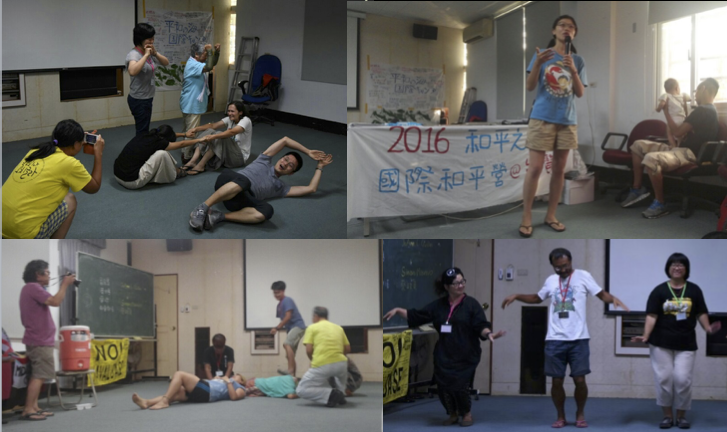 After returning to Kaohsiung, we had our final symposium on the 28th. Presenters from Luzon Island in the Philippines, from Lanyu Island, from the Taiwan organizing group, and from Jeju and Okinawa shared about “War Experiences and Peace Practices Beyond the Boundaries.” In Luzon, indigenous activists are working to learn from the memories of war and to resist against oppressive farming policies made by global corporations. Indigenous peoples in Lanyu and other parts of Taiwan are organizing to protect the diversity of culture and the natural environment through ICCAs (Indigenous peoples’ and community conserved territories and areas).

Jeju and Okinawa have long histories of reflecting on the horrors of war as a motivation for their anti-base peace movements, but the young Taiwanese participants struggled to find how they could relate to these struggles. There are three dominant discourses in Taiwan- keep the status quo, seek complete independence from China, or merge fully into the People’s Republic of China. Most people think that the US bases in Okinawa, Korea, and around the Asia Pacific region are important to defend Taiwan from China. The students questioned whether there could be an alternative to these options, and realized that it is important to think of regional security outside of the nation state system. Nation states on both the left and the right have committed many atrocities against the people. Instead they expressed hope that inter-island solidarity can provide an alternative option.

Before going our separate ways, we worked on our camp statement and discussed where to hold the camp next year.  Overall, this peace for the sea camp was a very full time with many new things to learn. The hosting team worked hard to prepare many things for us, and they were well organized. We always feel like camp is too short, so I hope that that will encourage people to join again next year! 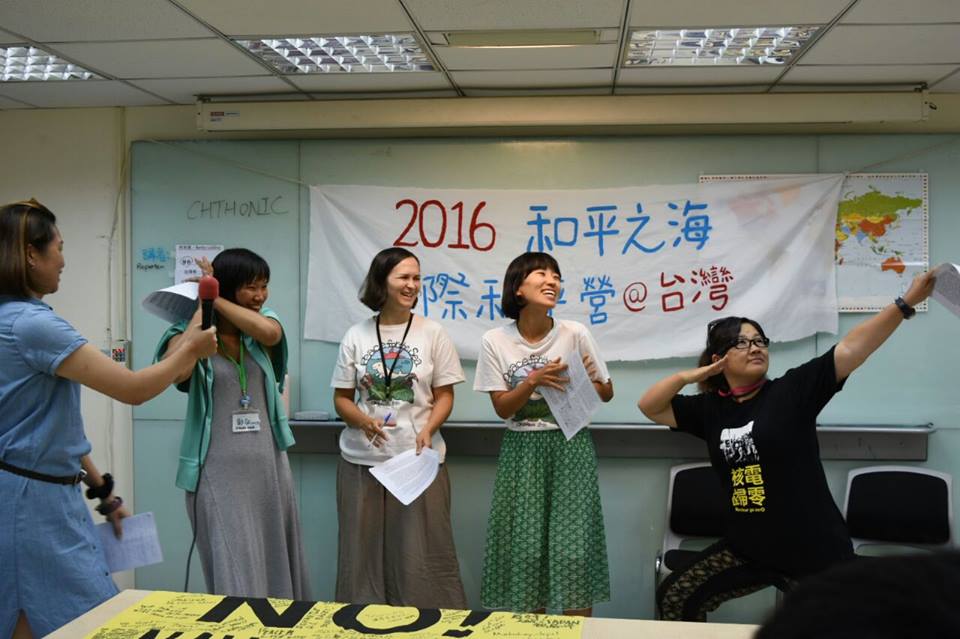